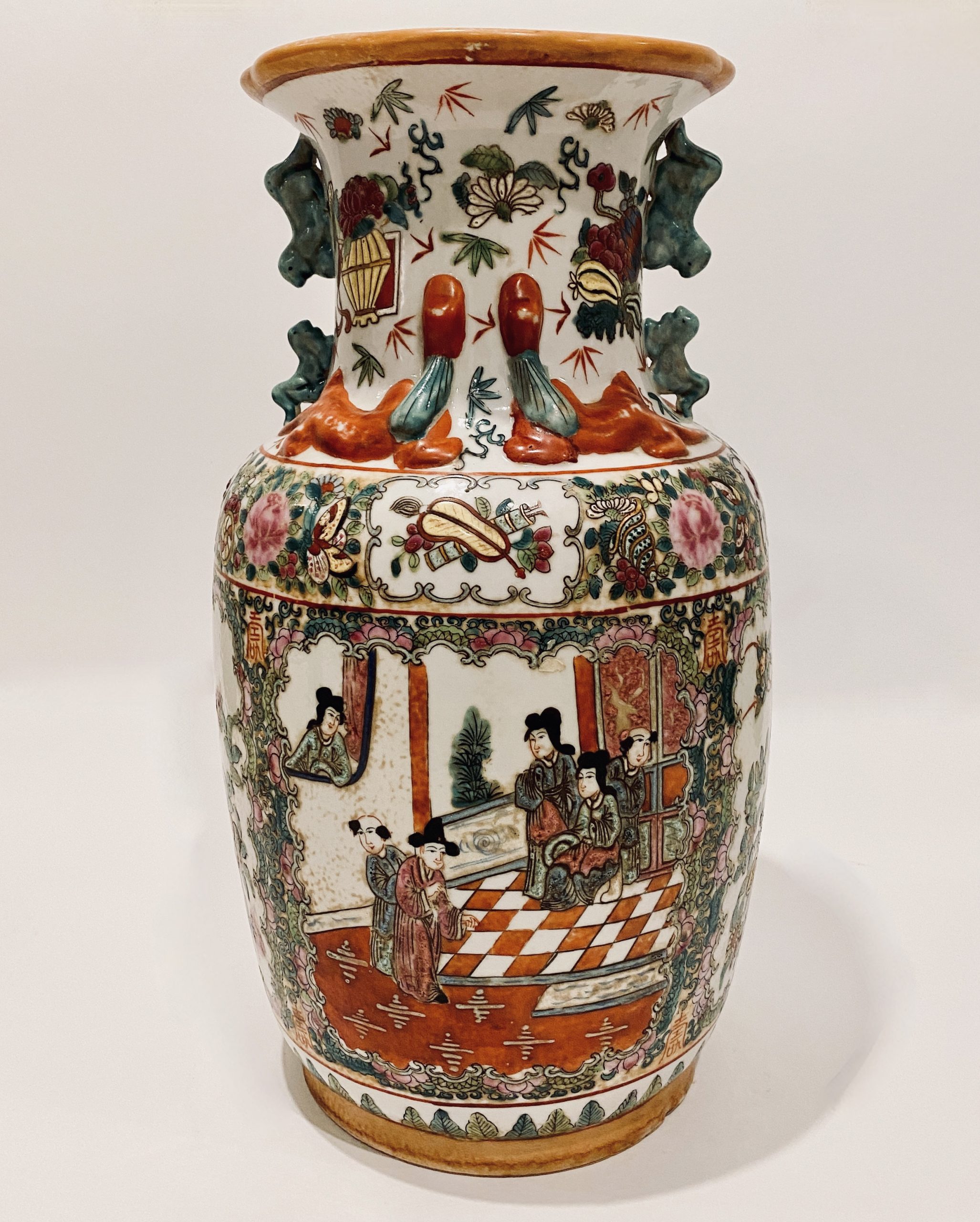 This outstanding Chinese Qing dynasty Imperial Vase (1644 -1911) is an  exquisite example of porcelain produced during the early Qianlong period  (r. 1736-95). An authentic Qing vase like this present item is an exceedingly rare acquisition, with most examples currently housed in the National Palace  Museum in Taipei, international museums, and private collections. No other  authentic, closely related objects of this type appear to have been published at this time. The intricately decorated Famille-Rose styl e porcelain bears a  Chinese script extolling ‘longevity’ to the emperor, and an important SEAL  MARK from the reign of the Qianlong emperor (r.1736-95).

The vase belongs to a special group of wares created in the Imperial kilns at  Jingdezhen, Jiangxi province, where the most highly skilled potters were  employed to produce porc elain for the Qing court. A high level of precision  and skill was demanded from imperial artists, with this object being an  outstanding example of the level of craftsmanship that prevailed in the  workshops of the Forbidden City at the time of the Qianlong Emperor. The

This important imperial vase was not intended to be made for everyday use,  nor as an Imperial gift, but was made to be included in the Emperor’s Art  Collection, alongside his other favourite antiques and jade pieces (the vase  was one of a small, exclusive group of yangcai porcelain made during  Qianlong reign). Too valuable for everyday use, the vase remains in  extremely fine condition, with no chips or damage, showing just a few parts  of wear and loss of enamel, consistent with age, and brown oxidation and  minor imperfections that cannot replicated.

The Qianlong Emperor was the fifth Emperor of the Qing dynasty and the fourth Qing  emperor to rule over China proper, reigning from 1735 to 1796.

Born Hongli, the fourth son of the Yongzheng Emperor, he reigned officially from 11  October 1735 to 8 February 1796.

Seal mark of the Emperor Qianlong 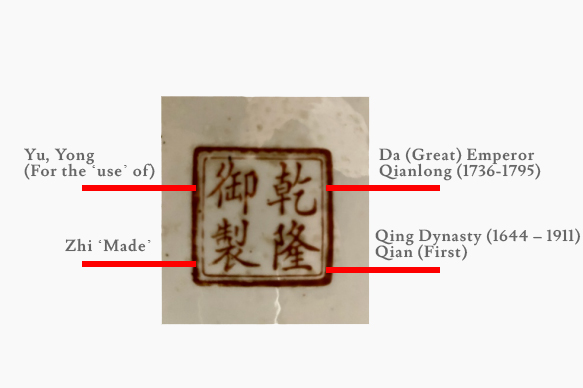 This imperial Qing dynasty vase bears Emperor Qianlong’s seal mark,  written in iron-red. This mark commemorates the importance of the piece  and signifies it was for the ‘ emperor’s use,’ made to be included in the  emperor’s art collection, alongside his other favourite antiques and jade  pieces.

Famille rose (French: rose family) is the group of Chinese porcelain wares  characterized by decoration painted in opaque overglaze rose colours, often  involving shades of pink and carmine. These colours were known to the  Chinese as yangcai (洋彩, foreign colours) because they were first introduced  from Europe (around 1685). The enamel paint used was adapted to porcelain  after it entered China. By the time of the reign of Yongcheng (1722–35) in  the Qing dynasty (1644–1911), these shades were favoured over the  translucent famille verte (five-coloured ware) overglaze colours, that were  previously used. Famille rose porcelain reached a climax of perfection at  Jingdezhen under the directions of Nian Xiyao (–1739) and Tang Ying (1682-

1756) and continued with great delicacy through the Qianlong period (1735- 1796), with this fine example of an imperial vase.

The term fencai (粉彩, literally pink colour) is perhaps more commonly used,  and is almost interchangeable with yangcai (洋彩). However, fencai did not  appear in official records until the beginning of the 20th century. The  Carmine colour, also known as Imperial, is the general term for some  red colours. The deep dark red colour is carmine (colour of the raw  unprocessed pigment), but lighter and brighter colours, as in this vase, are  produced when the raw pigment is processed. Sang de boeuf glaze (also  known as oxblood or brown-red “chui hong”), was a copper oxide red, as  was peach bloom glaze, which was probably blown onto the piece as powder.  These were the last major technical innovations at Jingdezhen, along with a  technique for firing gold onto porcelain, rather than mercury gilding.

In traditional Chinese culture, the colour red represents joy, happiness, and  auspiciousness. The combination of form and meaning has made red  underglaze very popular, with demand greater than supply. The creation of  red pigment makes this type of Qing porcelain very costly, as the technique  requires great skill in adjusting temperatures and time control – essential to  prevent the glaze from changing colour or breaking. 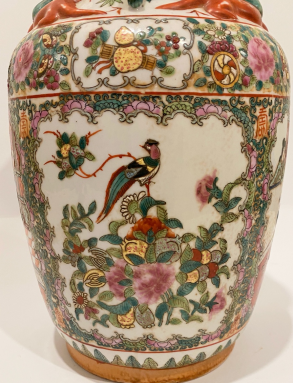 The vase’s attractive impression visibly reflects Emperor Qianlong’s taste
in art, his fondness for the traditional and the opulent. This vase
represents his personal taste, which gravitated towards porcelain designs that were artistically complex pieces.

In the Qing dynasty (1644–1911), imperial kilns were revived with  substantial orders for the imperial palaces and temples. The imperial kilns  led the development of the new palettes of overglaze enamels: famille verte, developed in two phases, was followed by famille rose, and later others. The  long reign of the Qianlong emperor (1736–1795) saw continuation of the  technical perfection, evident in this masterfully made Qing vase from the  Qianlong reign. The imperial kilns of Jingdezhen were fortunate in the  support they received from the palace during the reigns of the Kangxi (1662– 1722), Yongzheng (1723–35), and Qianlong (1736–95) emperors.

The term “overglaze enamels” is used to describe enamel decoration on the  surface of a glaze which has already been fired. Once painted, the piece  would be fired a second time, usually at a lower temperature. Under the  emperors of the Ming (1368-1644) and the Qing (1644-1911) dynasty, the  various techniques of overglaze enamelling reached their heights at the  manufacturing centre in Jingdezhen. This type of decoration provided the  challenge of transferring a two-dimensional painting onto a three

dimensional ceramic piece. Much skill and planning went into the placing of  the design, the execution of the calligraphy and the completion of the  painted decoration in the famille-rose palette, creating a masterpiece  designed to give great pleasure to the emperor.

Famille Rose spans the 1730s to 1760s, with the trend branching out from  the 1760s onwards into several styles. In general, the decorations become more influenced by European decorations. Decorations are based on Chinese  and western book illustrations and prints. During the 18th century Chinese  export porcelain followed the general trends in western interior decoration  fashion, as in table settings and silverware, in textiles, furniture and the  wallpapers of the time. In the middle of the 18th century, and famille rose was  popular, with its thickly applied, opaque enamels developed in accordance  with the continental fashion at the time. 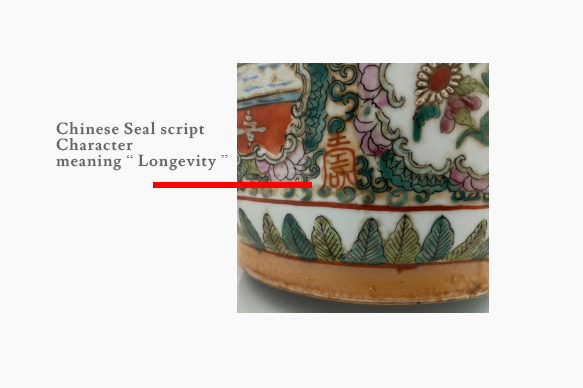 The legacy of Tang Ying (1682-1756), the brilliant Superintendent of the  Imperial kilns at Jingdezhen from the Yongzheng to early Qianlong reigns, was a gifted painter himself, signed scenes either painted directly by him

onto the vessel or transferred from his ink paintings by professional  porcelain decorators This vase bears a Chinese seal script symbolising  ‘Longevity’ 8 times on the enamel decorative painting. This calligraphic  excerpt illustrates a blessing wish to the emperor Qianlong, for longevity  (shou) and health (kang).

The emperor was a keen art collector and personally directed the trends in  this period for imitating shapes from ancient metalware, especially ritual  bronzes. Well-potted and standing at a stately size of 36cm in height, this urn-shaped vase has a wide body rising to a wide-waisted neck and flared  rim. The neck is flanked by a pair of archaistic green handles and Qianlong  dragons cowling at the neck.

Superbly enamelled in bright colours with phoenix proudly perched on  flowers and foliage, amidst a garden of blossoming peony, magnolia, prunus  butterflies. The colour scheme is based on enamels mixed with a white ground to give a softer impression against the flowers and decoration. The presence of rose enamel and iron red has been used rather extensively,  typical for the first decades of the 18th century. The decoration is framed,  as if the beauty of nature is revealed through a window, with the four scenes  alternating against repeating floral-foliage scroll work. There is, however,  also a clear Western influence on this vase. Not only in the enamelling, but  also in the depiction of grandiose, architectural complexes incorporating a  linear perspective: a technique introduced to court by European Jesuits.  ‘The overall composition is a masterfully balanced fusion,’ says the specialist. 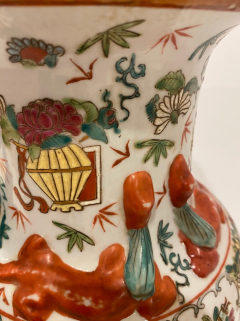 The carmine colour on this vase (also known as Imperial), is the general
term for some red colours. Sang de boeuf glaze (also known as oxblood or
brown-red chui hong), was a copper oxide red used in overglazes of

An important characteristic of traditional Chinese aesthetic culture is its  symbolism: most of the decorative patterns that appear on this Chinese  dynasty vase have implied meanings. The meanings are not presented  directly, but implicitly through puns, metaphors, rebuses, references,  folklores, stories of the images on the object. It is believed that by having  these objects wearing these symbols in the imperial court, these benevolent  wishes will come true. For example, the image of peony motif (king of  flowers) on this artifact, as viewed by the Chinese, symbolizes wealth and  honour, and a wish that you may be prosperous. The flowers chosen by the  porcelain painters are specified species representing each season: peony for  spring; lotus for summer; chrysanthemum for autumn; and plum blossom for  winter. When the four flowers appear together on the porcelain, they stand  for a complete circuit of four seasons. Other auspicious symbols on this  present item include the circle s, which mean rank or quality, dragons, (generally is a mild and beneficent creature), are a symbol

of the emperor. The fenghuang, (Phoenix), depicted on one of the panels, is  an immortal bird, and imperial symbol. The lions of Buddha on the handles  (often miscalled dogs) are frequently represented, as is the qilin, which is a  composite animal, not unlike a unicorn, that has a fierce appearance but a  gentle disposition. The benevolent wishes to the emperor expressed through  the auspicious meanings of these decorative patterns can be divided roughly  into five categories: fu (good fortune), lu (high official rank), shou  (longevity), xi (happy life), cai (great wealth). According to a Chinese classic,  Shangshu, the fu or good fortune could be further divided into five fortunes:  longevity, wealth, health and peace, good moral, natural death.